One picture worth 300 words 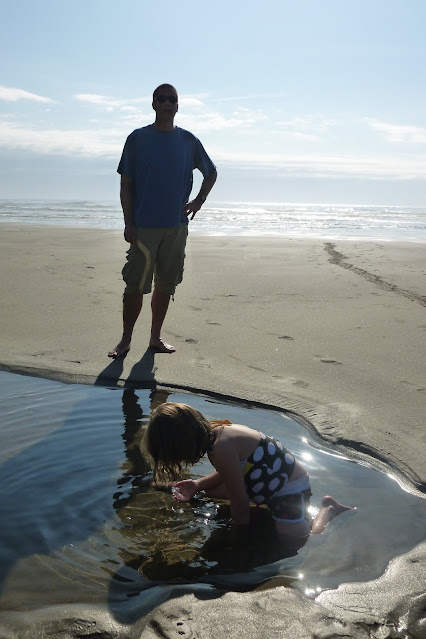 This photo taken in 2011 popped onto my iPhone recently, as one of those uninvited events from OneDrive called "Your memories from this day." I admit to generally being lured in to look at the images briefly and occasionally becoming nostalgic at the memories they elicit. However this picture of one of my sons with his then five-year-old daughter at the Pacific ocean immediately spoke to me with a truth beyond the picture itself.

I was struck at what an apt metaphor for good parenting the imagery is. Here is a parent standing guard, while his child explores something new and wonderful on her own. On closer look, we see the child enchanted at a clear jelly fish she has found in the tidal pool. The parent is neither interfering nor narrating the adventure, but rather is allowing his child to discover the mysterious creature she is holding. The parent is watchful, but not engaged in a separate activity, such as texting or chatting with anyone. He casts a shadow across the tidal pool, but the child is not in it. She is in the dazzling light. The parent could easily perceive the child to be in a spotlight as sparkles of reflection dance around her back.

The boomerang in the parent's hand struck me as a metaphor, as well. Something we all want when we send our children into the world is for them to return to us in love the way a boomerang does (and not lose their way because of an unforeseen influence or a poorly prepped throw). The parent in silhouette--backlit--also seems symbolic. The child is in the radiant light, enveloped and partaking in nature's gifts, while the parent appears to be allowing the moment to belong entirely to the child.

I'm a typical smart-phone photographer, but sometimes I can be surprised with what I've captured digitally. This photo impressed me with its wise and beautiful message for all of us who are parents. Thanks, OneDrive, for this unexpected surprise.