A fresh look at a stale reality 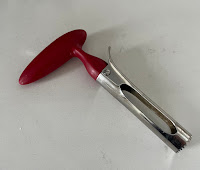 An apple a day keeps the doctor away . . . a trite saying that is actually damn good advice. I eat apples often but because my teeth are old, began to dislike biting into them in the traditional way.

When I admired the clever device my son, Phil, had in his kitchen, I received one like it for Christmas several years ago. Thus I have eliminated biting through apple skin. Now I core the apple and immediately dispose of it, then slice it and eat it as finger food. Much easier and convenient, too. 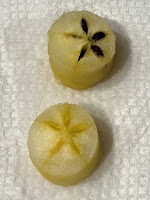 A couple days ago I didn't see the corer in the drawer where it was supposed to be (yeah, that aspect of old age with its brain fuzzies), so I cut out the core with a knife. For fun--just because I was holding the knife--I cut it in half, then half again. And what to my wondering eyes did appear . . . but this beautiful star!

Years ago when I taught preschool at our Catholic parish, using a new and beautiful program for three-, four-, and five-year-olds conceived by Bonnie Dreves (blog post from 9.13.14, Power of Small). One of the lessons in the nine-month curriculum, Wonder, helped four-year-olds discover hidden beauty in surprising places. Teachers halved strawberries to discover hearts and facilitated discovery of the stars inside apples in the same way for a strong visual component in the lesson. What a joy it was to see four-year-olds react to these small gifts. I'd all but forgotten about the star that resides inside every apple.

Seeing it fresh made me step back in gratitude and even a bit of wonder. Beauty can be found in the most unexpected places.

Love the beauty in the simple, Sallie. Great! Funny, I'm finding fun and beauty in apples too - but in drying them and making apple chips, even apples and parts I would normally throw away! -Stephan