Popcorn of the Opera

Last night I sat spellbound at my local movie house—taking 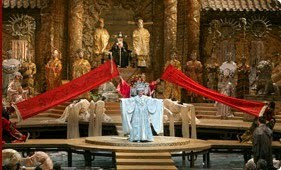 advantage of the “Live HD from the Met” program of simulcast opera performances from Metropolitan Opera. Puccini’s Turandot was an “encore,” meaning the performance I was watching had been captured at a live performance a week and a half earlier. So . . . it was a rerun, of sorts—but still a better way to spend a stormy evening than almost anything else I can think of. I sat enraptured, taking in the music and the gorgeous stage settings from what felt like the best seat in the house.

Not only was I loving the opera, I was loving the film crew’s brilliant use of the thirty-minute intermissions by showing what’s happening backstage as more than 100 stagehands bust their buns bringing in an extravaganza of scenery.

During the second intermission, with the cameras fixed on front-of-house for the final ten minutes before Act III, I allowed myself my own extravagance: a small bag of popcorn and a Coke. This purchase of movie snacks was a rarity at the movies for me. As Hubby will attest, I sometimes I smuggle my own Junior Mints into a Hollywood-type cinema, but I NEVER buy popcorn or a soft drink.

But there was something so silly about the idea, so twenty-first century-ish, that I couldn’t resist the impulse. Seeing Princess Turandot in her opulent palace feel love for the first time in her life while I was munching popcorn and sipping soda (with my best quiet manners) was fabulous, anachronistic fun. And even at the god-awful price of $10.50 for my treats (on top of the $18 for the special-event showing), I was spending only about one-tenth of what the best seat in the house would have cost me at the Met itself.