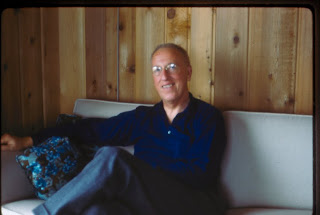 Here is a picture of my dad at the lovely little house that he and my mother built on the shores of the Pacific Ocean. When I close my eyes and take a deep breath, I can conjure the fragrance of cedar, which permeated every square inch of the house. It was a lovely place to relax, and he loved going there.

At birth, he was named Charles Wesley Johnsone, Jr., but after a few years (fewer than three, I believe), his parents went through legal proceedings to change his name. It seems my grandfather, who was known by his friends as Charley, really didn't like sharing his name with his beloved child. Dad was called "Ron" or Ronald for the rest of his life. By the time I knew him, he rarely revealed his first name. Instead, he went by "C. Ronald Johnsone," and this way avoided being called Charles.

He was an attentive and loving father who adored his daughters. How lucky my sister and I were to have such a gentleman as our dad.
at 5:12 PM