Tale of a tattletale 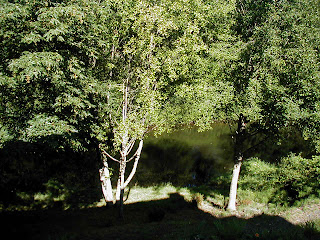 On Friday evening, a week and a half ago, while sitting on the deck overlooking the Sammamish River at our new home, Hubby and I saw an alarming act. A boat displaying a company logo, touting its professional aquatic weed clean-up capabilities, dumped a load of harvested milfoil into the river in front of our condominium. A crew member of the boat, standing on the bow of the pontooned vessel, was tossing the weed overboard by the pitch-forkful. Hubby yelled, "Cut it out!" (they couldn't possibly have heard Hubby), and I jumped up to get a pencil and paper so I could write down the name of the company.

That's illegal," I said to Hubby. "And on Monday I'm going to report them.

"Whom will you call?" he asked.

"I'll call the city of Bothell," I answered, hopeful someone on at the city (which manages the shoreline) would be interested. <

"Good luck," said Hubby. "It'll be hard to get anyone's attention about something so minor. It probably happens all the time.

On Monday when I called the City, the person I talked to was very interested. She transferred me to another worker in a different department who listened intently and thanked me profusely for contacting her. She asked if I wanted a follow-up call about the outcome. "Sure," I answered, then wondered if I'd ever hear anything.

Today I received a phone call from her, and a little later received an e-mail from the ecology department with the same information. The company that threw the milfoil overboard admitted to the incident, and has been issued a warning letter by the state. Next time, no such leniency.

The company will be fined $10,000 for each and every such incident thereafter. I was impressed and pleased that our observation of a forbidden act was taken seriously by my new city, and I love knowing the outcome.

Hooray for the power of the ordinary citizen and the prompt action of effective local government. It might sound pollyanna-ish to say when we all work together to protect the things that matter, we can make a difference, but let's hope the aquatic weed clean-up company heeds the warning. It shouldn't take too many of those $10,000 fines to change the way it does business
at 4:07 PM