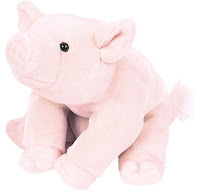 Following my carefully written out granny instructions, I was to deliver my four-year-old granddaughter, Mae, to her weekly pre-school music class by 12:30 p.m. That was after I picked her up from school and fed her lunch. I had been custodial grandparent already for two days, with a commitment of three more days. So far, everything had gone smoothly.

“Which coat do you want to wear, Mae?” I asked, forgetting how an open-ended choice, such as “which coat,” could make us late for class. But I cajoled, and she cooperated. As I pocketed the house key and headed down the steps for our short walk to the class, I noticed Mae had her favorite stuffy, Sally Rose Pig (“Pig,” for short) under her arm. “Wait a minute. I see you have Pig. Is it OK to bring her to music class?”

“Oh, yes,” replied Mae. “Everyone brings their stuffies to class.”

“OK,” I said, not quite sure this information was entirely accurate. I made a mental note to ask again at the classroom door if, perhaps—instead of joining class—Pig might prefer to stay with Mae-ma for the singing session.

I had allowed plenty of time for our block-and-a-half walk. We skipped for the first half-block, then walked on top of a raised curb. We admired a fallen feather and stepped over cracks, chattering away about our surroundings. Two magpies were swooping from tree to tree—providing an airborne distraction. We stopped to watch a crew of stonemasons creating a wall in front of a residence around the corner from the music class. The workers smiled and waved at us, as we admired the way they were cutting the stone to fit together like a giant puzzle. Ten minutes later, we arrived at the church where the class was held. We descended the stairs to the basement—the Sunday school annex.

Lots of mothers, grandmothers, and pre-school singers were already in the waiting area provided. Mae handed Pig to me so she could join several other children playing on the floor. When the teacher came to retrieve her class participants, Mae took Pig from me.

“Are you sure it’s OK?” I asked her one last time? As a grandmother, I didn’t want to allow a contraband activity.

“Yes!” And tucking Pig under her arm, Mae disappeared with the other children down the hall, as eagerly as the children of Hamelin must have followed the Pied Piper.

At the end of the music lesson, adults were invited into the classroom to hear what the children learned. I was enthralled by this—my first—visit to the classroom. The children took turns singing verses about whole- and half-notes, pointing to musical notation on the flipchart with the teacher’s baton. Applause and goodbyes. We walked home via the treat store (pre-approved by her parents) where Mae picked out a tiny bag of candy and I selected one, too (to share, of course).

At home we played with blocks, told each other stories, read a couple of picture books from the library, poked through her toy box, then settled into a game of pretend ”Campout” with nearly all the stuffies—Little Pink, Tigger, Droopy, Dr. Quack, Gee-off. Mae got into the spirit of camping by creating a sleeping bag out of her bedding and changing into her own pajamas.

“Where’s Pig?” she suddenly asked, with a look of alarm crossing her face. We searched through the remaining pile of stuffies at the foot of her bed and returned, empty handed, to the living room. Without even asking the question, I knew the answer.

“Did we bring her home from music class?” I asked, mentally replaying our afternoon. I was sure Pig had not been at the candy store with us, and not on the walk home, either.

Mae shook her head no. Her eyes were radiating alarm—like those comic book pictures with the parentheses moving out from the character’s eyes. “She’s gone!”

“I’ll bet she’s still in the music classroom,” I said—trying to sound calm, assured, and unworried—none of which I was. “Let’s go back to the church and see if we can find her. If she’s not there, Pig will have a big adventure to tell you about when you see her next week.”

Mae quickly put her clothes back on—even her shoes (on the right feet, too). We were ready to leave the house within five minutes of our discovery, an amazing accomplishment of itself. As we hurried away from the house, I talked about how Pig needed an adventure. I was determined to stave off Mae’s worry. (After all, I was doing enough of that for both of us.) Everything during the last two days of my grandma duties had gone well, but now I was feeling the challenge. How could I prevent her from feeling devastated at the loss of her favorite stuffed animal?

“Do you think Pig’s sitting on the piano singing? Maybe she went home with the music teacher—that would be interesting . . . and she will have lots to tell you about it next week.” Walking with much more determination than the first time, we barely slowed down in front of the stone wall project, despite grins of recognition from the stonemasons. I jabbered the entire way, proposing scenarios in which Pig was having the time of her life.

“The teacher makes us put our stuffies over by the wall. That’s where Pig is.” As soon as Mae said that, I remembered how all of us parents and grandparents had gathered behind our own little singers—many of us sitting on the floor—and realized it was no wonder we forgot Pig. She had, in effect, been offstage . . . in the wings.

I dreaded approaching the back door of the church, imagining it locked for the day—this Sunday school annex, anyway. “If we can’t get in here, we will go around to the front door,” I said, with faked confidence. There was just one car in the parking lot—a far cry from the several dozen cars there for the music class. I gingerly tried the door; it opened. The church hallway was still lighted and the door to the music classroom was standing ajar. Mae made a beeline for the room.

As I walked behind her, something pink caught my eye. Pig was sitting on a shelf by a row of coat hooks. “Mae! Here she is!” I was squealing like a pig myself—not like a dignified, old grandma. Such a reunion it was, too—with a little girl, her favorite stuffy and her custodial grandmother all feeling immense relief. Walking home, we sang happy songs to Pig who didn’t leave Mae’s arms the entire way.

“We thought you were having a big adventure,” Mae said to Pig, “but instead the teacher put you where we could find you.” She sounded almost disappointed, but Mae-ma couldn’t have been more relieved to have the pig adventure turn into a “pig nothing.”

Of course I was completely charmed by the adventures of Mae and Pig. Was so relieved to find out at the end of the story that Pig was patiently waiting.
Lucy

It sounds like she's the perfect audience for the Knufflebunny picture books by Mo Willems. They are favorites of many little ones, and adults enjoy them too.