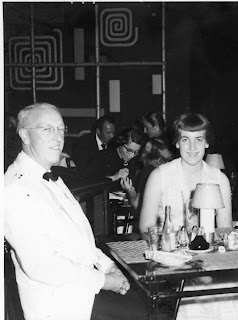 Currently, I am transcribing longhand letters written by my father in 1959 while on his first trip to the Orient. These three-and-a-half dozen, multi-page letters, written while away on a three-month trip, were tucked away by my mother, who--I'm quite certain--anticipated his enjoyment of them in his old age. Trouble with that plan was his premature death just four years after he wrote them. At that point the letters became sacrosanct--and have been carted around, first by my mother, then by me, for the past fifty-two years.

Now I'm finding them enormously fun to read from my viewpoint as an old woman, almost twenty years older than he was at the time of his travel. Plus, fifty years later, the world has changed aplenty. Plus, tourism has changed aplenty. Add to that our vast culture-bleed and access to all things foreign via Internet, and I might as well be reading Lewis and Clark's letters!

I have wondered in the past couple of years what my dad would have thought of my blog. Oops--think I might have found a clue in this excerpt of his May 10, 1959 letter, in which he is telling Mother in the letter that he declined an invitation from an American business associate to socialize with some American friends living in Tokyo:

" . . . I told him I was busy and could not join him, as I get damned sick of conversations limited to the first person singular, and I have all I can stand of that without having it inflicted on me on Sundays, as well."

What is a blog if not a one-sided conversation revolving around the first person singular?
at 11:15 AM

Love the photo of you and your father. Brought back a lot of very happy memories of him. What fun to read about his travel experiences. And I look forward to reading some of them when you get around to it. I am delighted each time when I see a white star on a blue background on my Mac that you have added a new blog entry. Thanks so much!
Lucy