O U Q-T, O R U A B-U-T?
Maybe this question, carved into paving stones in the city’s center, is really just a way of giving Charlotte, North Caroline, a voice? If she were to ask me, I’d say she’s a beauty, all right. 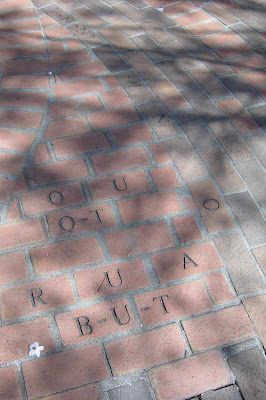 One of the prettiest places in the Uptown Neighborhood is “The Green,” an open space in the financial district that’s filled with literary teasers, fountains, statuary, etc.
The bricked walkways are covered with alphabet coded writing as shown in the picture, whimsical hopscotch games, and scattered pieces of bronzed paper imprinted with poetry, which appear to have blown against light posts and park benches. Some poems are just lying on the ground on bronzed papers. All this is in a partial city block in the heart of the financial district. 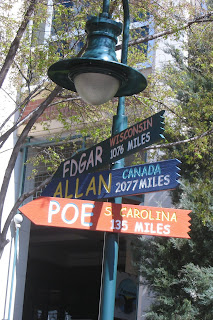 I was skeptical there’d be enough to hold my interest in Charlotte for a week, what with its big claim to fame being the NASCAR Hall of fame. But was I ever wrong!

Its art museums are world class. The Levine Museum of the New South houses a spectacular permanent exhibit on North Carolina’s evolution from rural (cotton fields) to urban (finance and industry) since the civil war. The museum’s long-term temporary exhibit that it sends out to other cities for year-to-two-year stays is called Courage. I wept my way through it, as I learned—first hand—how it was to have attended a black separate-but-equal school, and grasped in a new, visceral way the significance of Brown vs. Board of Education.

And—for the record, I loved the NASCAR Hall of Fame! More fun than I could have imagined, especially a simulator that let me, a participant, feel the pull on the steering wheel as my stock car sped around the track. I crashed my car at 136 mph and did several (simulated) 360s as I worked to get it under control before it hit the wall (which, of course, it did anyway).

Do visit Charlotte it you ever have a chance.
at 4:09 PM