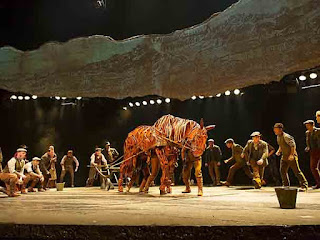 When is the last time a theatre piece moved you to tears? Hubby tells me I’m a pushover when it comes to emoting in the audience. And yes,  I’ve had quite a bit of experience weeping in the theatre during the past half-century of play going. I am the perfect audience member in some ways, as I am instantly drawn into the story—although if the production is seriously flawed, I can be brutally critical. But give me a good script that’s reasonably well staged by an insightful director with a talented, disciplined cast, and I’m an empathic sucker. Sometimes I have to cover my mouth to keep from audibly crying, so as not to disturb other audience members.

In 1959 in NYC I did sob out loud, almost uncontrollably, at the plight of J.B. as I sat watching Archibald MacLeish’s play by the same name. Listening to the recording of the play with its original cast, Raymond Massey,  Christopher Plummer, and Nan Martin, still makes me weep. But at the time I saw it live, I was nineteen years old, overcome by the devastating power of poetry in the hands of professional actors.

Now I am going to admit publicly that only a couple of days ago I wept over the performance of puppets. Perhaps you are conjuring up the image of little Punch-and-Judy type hand puppets, but in this case, we’re talking HUGE. Puppets so big that they each have three operators. If you’ve already seen War Horse on Broadway or on tour, this won’t come as a surprise. Only the hardest of hearts could be unmoved by the beautifully distilled story. I am NOT talking about the movie, however. I'm talking only about the play.

The production I saw in Seattle, co-sponsored by The Seattle Rep and Seattle Theatre Group, was truly magnificent—the essence of what a good theatre piece be. The sparse set was eloquent in its minimalism; the actors were talented; the script was well written. But it was puppet-masters— with their nuance, their tight choreography, their perfect timing that made it extraordinary. And the message—that war is utterly devastating—is exceptionally powerful in this conveyance.

If  your town is hosting the National Tour of War Horse and you can get tickets reasonably (I have a feeling the scalpers are making a killing on this one), try to see it. It’s a superb piece of theatre.
at 4:20 PM