Lament of the Song Sparrow’s Victim 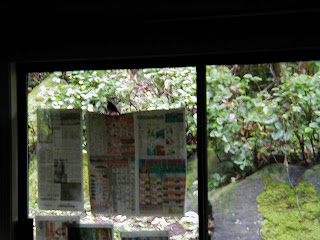 Below is a silly poem I wrote in 2008 when a song sparrow became unable to stop himself from slamming into our dining room window every few minutes for three entire (very long) weeks. Eventually he gave up . . . or died from the repeated blows.

You need to look closely to see him perched on the newspaper that was one of many (maybe six or seven) things we used to steer him clear of the window. Nothing helped for more than an hour.

Recently a friend told me she is having the same experience at a window in her house. As one of my former neighbors, and a serious birdwatcher/bird lover, commented to me back in '08, "This may be Darwinism being lived out right in your backyard. That bird (and his over-reactive instincts) should probably not be able to find a mate."

The poem is irreverent, so please don't read it if you think you will need to report me to the Audubon Society, as a result. But it is National Poetry Month! Nobody says it has to be good poetry. Apologies to Edgar Allan Poe.

Who’s that knocking on my window?


Or other means of silencing, like
Whap, whap, whap. I’ve had my fill.