Yesterday I was on a step-stool, hunting for something on a top shelf in the guest room when I spied a plastic bag shoved way back into the corner. I had no recollection of putting anything on the closet shelf.What is it? I wondered, and gingerly pulled it forward and peered through the clear plastic to see lumpy parcels of tissue and bubble wrap. OMG . . . could it be? Is it possible . . . ? 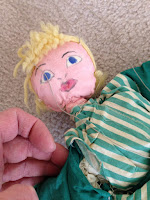 Yes!  In the bag were three marionettes from my grade school days. THREE! Two “store-bought,” a clown and a young man manufactured by Hazelle, and one I made as an eleven-year-old under the tutelage of my sixth grade teacher, Miss Mary Metcalf.

I couldn’t have been more excited to find Holger, the character who was hero of the script, Why the Chimes Rang, a puppet play presented to the entire school body at McGilvra Elementary school (a Seattle public school) by our classroom in December of 1951. 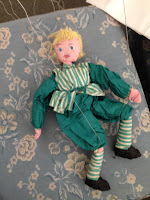 As it happens, I am in the midst of writing about my grade school years—legacy for my granddaughters—so I have thought a lot about the creative and energetic teachers I was lucky enough to have in the intermediate grades, and how much work and fun it was to make marionettes. I was certain my puppet, Holger, had been thrown away in one of our many moves—but I was wrong. I couldn’t have been more excited. I carefully unwrapped him, then gently twisted his strings counterclockwise to allow him to hang naturally from his controls. Wrinkled and worse for wear, yes, thrillingly heartwarming, as well. I could see my primitive stitching of his costume and my attempt to give him an expression that would reflect neutrality so he could act happy OR sad.

Why the Chimes Rang was written in 1928, a faith-based play set in medieval Germany. The cathedral's chimes in the town ring, at the most, just once a year—and only when a truly selfless gift is presented at the altar on Christmas Eve. When the play opens, the chimes have not been heard for 100 years. Holger and his younger brother—orphans who live with their uncle in poverty—are just headed out to church when an old woman knocks at their cottage door. 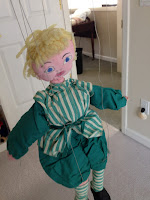 Twelve-year-old Holger invites the shivering stranger into the cottage to get warm, and thereby misses his chance to go to the cathedral—an event he's eagerly anticipated for a year. His brother and uncle go on without him. As he talks to the old woman, he realizes she’s starving and offers her the last crust of his bread. Of course, it is Holger’s act that causes the chimes to ring. I still remember the beautiful sound of chimes from a record that a fellow sixth-grade cued up perfectly. I manipulated Holger's controls to make him kneel in reverence as he hears the chimes in the distance, unaware of his selfless role in their ringing. By the time his uncle and brother return to narrate the excitement of the entire town, the old woman has mysteriously disappeared. 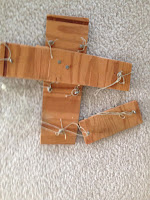 If you think it’s bad form to pray before a public school football game, imagine a public school teacher spending hours of classroom time preparing her students to present overtly religious plays for the entire student body of their public school.  Everyone in class was involved--making the marionettes from scratch and rehearsing the plays for weeks in the classroom.


I would not go back in time for anything—I’m not a devotee to that fictional notion of the “good old days.” I think the sensitivity, awareness, and respect shown to all beliefs that now prevail in public schools is a far superior approach than what we did then. But I am still grateful to have had that sixth grade experience. And I am so thrilled to be reunited with Holger. After all, he made the chimes ring—and I can still get a little teary thinking about it.
at 10:18 PM