Once Upon a Homesick Christmas

When I was a junior in high school, our family hosted the school's 'official' exchange student. Sigrid was sixteen and from Braunschweig, West Germany (yes, the wall was still up in 1956). She arrived in Seattle in time for the first day of school in September. She was shy, still struggling with English, and the first few months were a tough adjustment for her. My ever-gracious mother did her very best to provide the nurturing care that Sigrid had grown accustomed to, but sometimes nothing Mother did could alleviate the extreme homesickness that afflicted her. If only someone in our family spoke German! (My sister had studied a lot of German, but she was in college and not home much.) 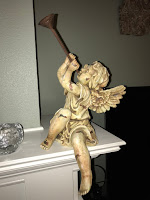 It was really hard on my mother because she felt like she couldn't find a way to truly comfort Sigrid. I wasn't much help, as much as I wanted to. Sigrid didn't jive with my friends--she was really very shy--so I led a divided life that semester: time with Sigrid vs. time with my friends. She and I walked to school together every day and I tried everything I could think of to help to integrate with the social and academic scenes, but I failed as much as my mom. The difference is I didn't take it quite as personally.

But we kept trying--and definitely had some good times, despite the stress of hosting an unhappy and sad girl living with us. She made a beautiful Advent Wreath from a coat hanger and fresh evergreens, then led us in her Lutheran Advent prayers each Sunday evening in December. When Sigrid gave my mother a gift on Christmas Day, little did anyone in the family suspect it would still be part of our Christmas decor these sixty-two years later. The Christmas box sent by Sigrid's mother to be shared with her host family made for a memorable day. 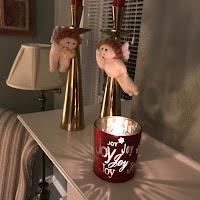 This lovely hand carved and crafted nativity scene was tagged as a special thank-you gift for my mother, who was properly impressed. "Exquisite," Mother said over and over. "Oh, Sigrid, that is so kind of your mother."  I was sixteen and had never even heard of Oberammergau, but the miniature scene enchanted everyone our family.

This photo doesn't do it justice, and it is definitely the worse for wear with tiny pieces of the carving having broken off over the many years it's been part of the Johnsone/Glerum Christmas tradition. But I still love it. Usually surrounded by my collection of eclectic angels, it has only a few angels paying homage this year. Still . . . it evokes all kinds of wonderful memories, one of the joys of the season. Thank you, Sigrid.
at 9:19 PM