An Old Woman Learns Her Lesson 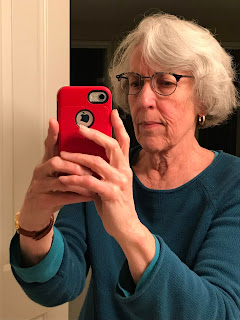 If you're my age (78) or, at least, in the same age bracket (65+), you've no doubt heard your peers rant about the pitiful behavior of youths who are overly absorbed in their cell phones. "They never look up . . . never interact . . . never hear anything," etc.  It can get tiresome.

Recently I attended an early-evening meeting and was driving by a local favorite hamburger joint when I realized two things: I was hungry and had nothing at home I wanted to eat. Aha, I thought . . . I'll get a Ranch-burger for dinner--Yum! It was well after 7 p.m. and the joint was pretty much packed with high-school kids. Instantly realizing I was the oldest one in the place, I jestingly asked the sixteen-year-old order-taker if it was OK to eat in, or if I'd put a damper on the "party." She smiled good naturedly and assured me it was OK to stay. I ordered a burger and (ah, heck, why not) a shake. She took my money, gave me a number, and said it would be a ten minute wait.

I chose one of two empty booths near the door. Everything else was occupied--some by groups of like-gendered friends, others by boys and girls together. I felt self-conscious because I was at least fifty years older than anyone on the premises, including management. Wanting to occupy myself while I waited (I didn't want to be perceived as staring at the kids as they laughed and chatted with each other), I decided to check my cell phone for messages. After all, I'd been in a meeting with my phone silenced, and there was bound to be some stuff to read. Sure enough . . . and my favorite word game app beckoned, as well.

Somewhere in the ruckus of chatter I was dimly aware of an echoing vocal phrase. After four or five repetitions, I looked up. A young man with a tray was pacing the restaurant calling out a number. Yes, it was my number! I raised my hand and he came hurrying to  my table. As I pocketed my phone I quipped, "Well . . . I guess I'll never be able to complain about how young people are too absorbed in their phones." The look he gave me was hilarious. He must have been thinking the exact same thing. He mumbled, 'Yeah, guess not,' and left my table grinning from ear to ear.

Reader, please hold me to it: I promise never to complain about young people lost in their cell phones!
at 6:15 PM