Milwaukee Sentinel November 8, 1980
Recently I 'Googled' myself--that is to say, I put my name into a search engine just to see what would surface. About a dozen hits--mostly because of this blog and several links to my published articles online, plus some volunteer connections and donations made public by various non-profits I support. Nothing too surprising except for this: "Sara Glerum, Wauwatosa, Wis, Finds Bible Inaccurate."

Well, that got my attention!  I immediately clicked the link and rediscovered a letter I'd written published in the Milwaukee Sentinel on November 8, 1980, entitled 'The Value of Life.' The letter summary of someone else's letter was adjacent to my name, thus confusion of erroneously associating my name with that other letter (I added the big X for clarity's sake). Click on the link below the clip here: 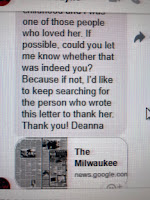 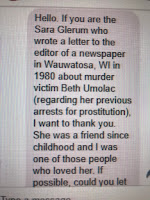 Rereading what I had written The Sentinel in 1980 took me back to how indignant I had been at a front page story the newspaper had just published. But I'd also forgotten how thirty-two years later in 2012 I received my first-ever "Private Message" on Facebook. It was from a woman named Deanna--a total stranger to me. She explained that friend, Beth Umolac, was the woman who had been murdered in 1980, and how she, Deanna, was willing to keep on looking for the right Sara Glerum to thank, if I wasn't the  one.

I'd all but forgotten how hearing from Deanna made me feel then--sad, of course, remembering the story of a murder, but also gratified because apparently my letter had made Deanna feel a tiny bit better. I was incredibly touched that after more than thirty years, she was still wanting to thank me. That she searched me out and found me still strikes me a beautiful gesture and proves the adage, "What goes around, comes around."

I've written posts on this blog about people from my past finding me because of something I'd written on it, and it never fails to thrill me when a connection is made this way. Meanwhile, I do encourage my readers to 'Google' yourselves, and you might find yourself recalling things you'd all but forgotten. And besides, it doesn't hurt to know what's out there floating around with your name attached.
at 5:29 PM