And that began periodic visits from Madame Sylvia, always happening around the children’s bedtime. I’d hastily overlay Madame Sylvia’s outfit on top of my housewife garb, kicking off my shoes and squeezing into green high heels as I tied the kimono shut with its sash, and slap on the headscarf and earrings while running around the side of the house to ring the front doorbell. I got very good at this quick change, and made a point of mentioning to the children their dad would get them ready for bed that night because I had to go to the store. Madame Sylvia arrived several times that first year, then tapered off to maybe once every couple of months for three more years. The children always were on best behavior the minute she entered the living room. 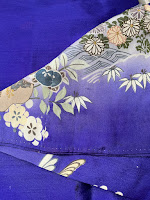 She came to our house for the last time in the early summer of 1972, ostensibly to say goodbye to the children who were moving (with their parents, of course) to in August. Even then, as children nearly three years older, they never let on if they knew her identity but played into the role of perfect children eager to please the visitor. She visited us only three times after the farewell. Once in to the rented house five months after transplantation. She was just passing through , she said, and wanted to make sure everyone was doing all right. The children took polite turns talking with her, telling her about their school and asking her questions. She was never at a loss for answers—ad-libbing her script as fast as it came to her. Several years later she came on Halloween—and offered to answer the door while the children went afternoon Trick-or-Treating. That was a bittersweet visit because it became evident the game was over. In all those years, the children had never pursued the identity of Madame Sylvia. Instead, they gleefully described her to me when I’d arrive back home after my inevitable after-dinner errand. She was a delicious secret that everyone enjoyed. But there was no doubt that afternoon: each of them clearly recognized me, and yet we still did not talk about my double identity. Only a few years ago one of my sons confessed that he had never been entirely certain of Madame Sylvia’s identity until that Halloween.

Madame Sylvia’s final appearance was in Santa Fe at a family reunion in 2002. She wore different earrings (one had been lost) and she no longer fit into her green high-heeled shoes, donated to a thrift shop many years prior. But she knocked on the door of the rented casita where everyone was gathered after supper and entered the room in her purple silk kimono and blue headscarf. Only her husband knew anything of her plan to join them. He graciously and formally introduced her to the people she didn’t know— the grown children’s spouses, all of whom had heard about her. She seemed as delighted to meet them as they were her and shared with each of the women her positive first-hand impressions of them. After a few minutes of conversation, she said goodbye to everyone and excused herself. “Don’t see me out,” she said. “I know the way zee vay.” She has not made an appearance since.

I still have the kimono and sash. A few years ago I asked my neighbor who’s a native of Japan if she would like to see the garment crafted from beautiful silk and dyes from the early-to-mid 1930s. She admired the quality of workmanship with its intense color and pattern. She laid the kimono out and showed me the proper way to fold it, which I did and then wrapped it in acid-free tissue. I didn’t share with her how many times I’d worn it as Madame Sylvia, lest it sounded irreverent and foolish. Only my closest friends have heard about my foray in this avatar who triggered my children’s best behavior. As I tucked the precious tissue packet into a drawer, I could hear Madame Sylvia’s phony-accented voice addressing me. “I am vun of the best ideas you effer had.” I nodded in agreement as if she had spoken aloud.