A new discovery about an OLD item 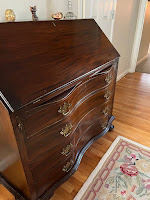 As far back as I can remember, my father had an intriguing desk. Called a "Governor Winthrop" style, it had a dropdown desktop that folded at an angle when not in use. Before it was Dad's, it was his father's, and when my mother died, she specified in her will the desk was to be mine. Thus it came to live with the Glerums in 1969.

It very much looks its age--a century plus, but I don't know its exact provenance. Not only is its finish badly worn and marred, but its legs were chewed on by our family dog in the late '50s. Our English bulldog, Winston, apparently found comfort in gnawing away at the claw-like legs when we'd leave him alone too long. The desk resided in the part of the house that Winston was confined to when alone, so there wasn't much we could do but scold him when we noticed the increasing damage. Of course, it never happened when we were home.

You'd think I'd know the nooks and crannies of a piece of wood furniture after living with it for eighty years and owning more than fifty, but yesterday it surprised me. One of the desk's delightful features (and why I have loved it since childhood) is its six slots, five tiny drawers, two secret compartments, and one tiny cupboard inside the dropdown area. For as long as I've had the desk, I've kept tickets to performances in the tiny cupboard at its center and, because of it, I've never misplaced hundreds of paper tickets issued for a season or a one-off performance. Until yesterday.

I intended to get out my old-fashioned paper tickets (you know the kind, maybe 1.5" x 4") for an event this weekend. I pushed aside several folded, home-printed tickets for other events, saw the little envelope I was looking for and went to grab it. But, wait . . . I had just seen it, but it was gone! The small envelope seemingly vanished, which I substantiated by taking everything out of the compartment and reexamining the contents of several envelopes, flyers and pamphlets. What the f - - k!

Probing around with a flashlight helped me realize there was a small gap in the back of the little cupboard. I concluded the tickets must have somehow slipped through to the back of the writing surface underneath the cupboard. But even scraping a ruler underneath that area, I found no tickets! (I did find several rubber bands, a paper clip, a bookmark and a museum guest pass lying there, though.) Next, I opened the top main desk drawer, wondering if the tickets had fallen through to that drawer, but--no--still no tickets! 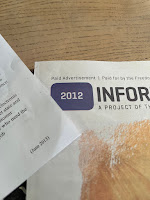 Next I removed the drawer where, sure enough, the ticket envelope was lying on its supporting wooden shelf that separates it from the next large drawer. In addition to the tickets were several other larger pieces of paper, two with dates on them that put them back to 2012 and 2013! The two dated sheets were too big and unimportant to ever have put in the locked cupboard, so  I have no idea how they got there.

I can't remember ever taking out the drawers except when preparing the desk for a move. The last time that happened was 2010. But I'd never dreamed an item in the little locked cupboard could make its way into hiding in an instant, a poof! My point in writing this? For me it's a smack-in-the-face lesson: Never, ever, take anything for granted. For you, it might be a lesson in how aging brings on a recalibration of what's exciting enough to spend time writing about it. (EEK!)