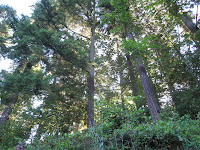 A person very dear to me who lives in northern California suggested via phone last night that maybe we should visit California to get away from the gray and rainy summer days he (and everyone who doesn’t live here) associates with Seattle.

Seattle’s July and August are generally rain-free, and we’ve had a particularly spectacular display of summer this year. In June we almost broke a record with 28 consecutive days without rain, and in July we’re in the third week of a sunny, warming trend that has no immediate end. Sunny skies every single day, and now some record breaking temperatures of 90s and maybe even three digits.

Of course, there’s a down side to everything . . .it’s tough on flora and fauna. In our woods the tall Douglas firs are considerably stressed, and small native plants are curling up in the floral equivalent of the fetal position to protect and conserve life-energy. When we water our garden plants, birds appear from everywhere . . . flitting about in the sprinkler’s spray with what looks like a dance of joy.

We humans “have it pretty good” this time of year in the Pacific Northwest. Just as the words of Gershwin’s opera suggest, “the livin’ is easy”—especially if we decide to avoid anything involving the oven or heavy labor. Writing a little something for a blog seems just about the right activity level. I wouldn’t miss Seattle’s summer for anything.
at 11:32 AM

We are loving the heat! Since it's always on the cool side where we live.---T