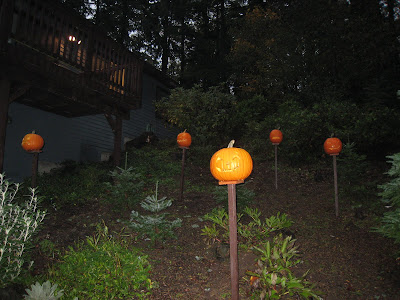 Inspired by Matt Glerum's Pumpkins-on-Pikes party recently held in Marin County (his 17th such event), we created a mini version (a mere five jack-o-lanterns impaled on pikes, compared to his 150 plus) in our side yard. We're calling it Mini-PoP. With two flickering electric tea-lights to illuminate them all night long, these faces look better the darker it gets. (His pumpkins have real tea-lights inside, which make them burn brighter, but ours don't burn out.) Without a timed exposure, the camera cannot capture the magic. But . . . you get the idea.
at 10:21 AM

How did you make the pikes?

Pound a long nail into a 4" suare of plywood (or equivalent), then attach it (with a second nail) to the blunt end of a pointed stake. The point of the long nail faces up. After the stake is set in place, the jack-o-lantern gets pushed through the nail, which keeps it from falling off the stake.

Thanks! I'm going to try to do this for my ranch's halloween party (www.flipflopranch.com). I'll post pics if we manage it :)