Where the Wild Things Are: 2 Sideways Thumbs

I eagerly paid my money and took my seat on the second night of the movie's release. After seeing previews, I knew I had to be among the first to see the film and find out for myself where and how the wild things were.

Was it scary? No, probably not even for children—the monsters, anyway. The scariest thing to me was the casting of a ten-year-old as Max. Watching a youngster old enough to have learned a measure of self control so completely out-of-control with anger—that’s scary. The book depicts a very little boy, probably a preschooler, who’s temper gets the best of him, and that’s a very different scenario . But a ten year old? Worrisome, at the very least.

The monsters were enormously likeable, and only when I let myself imagine Tony Soprano in a fuzzy monster suit did James Gandolfini’s voice work, as Carol—the dominant monster—project a scary edge. Doesn’t the mob recruit young men who have anger management issues? Was Max being groomed for a life of organized crime?

I loved Lauren Ambrose’s voice for her character, the hopeful, but disappointed, female monster, KW. The film had a measure of sweet, empathic moments. If I’d taken a child with me to see the movie, say a seven- or eight-year- old, we could have had a good discussion afterwards. That would have made it worthwhile.

As it was—it verged on boring. Give me thirty-two pages, any day, of nearly wordless narrative and the fabulous artwork of Maurice Sendak over the technically dazzling treatment of Hollywood. When all is said and done, it’s the reader’s imagination that brings a book alive. 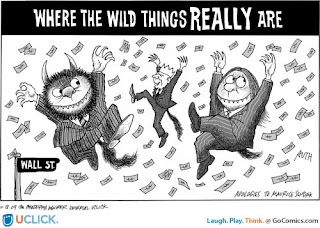 You are so right: why try to embellish Dr. Seuss? Thanks a lot for the tip, Sallie. I think I'll give WTWTA a miss...

As I lay parsing my thoughts during my three-o’clock wake-up—maybe you have those yourself? It’s my theory that about 80 percent of the world’s women over forty are awake at any given time during the hours of two and four.

Anyway, while thus engaged, I heard this voice come out of the blue: “Not Seuss, you dork. Sendak!” Not having grandchildren, one loses touch with such things, but I do remember those wonderful images. In fact, maybe it time to read “Wild” again…

Thanks for the heads up Sallie. Not that I go to the movies, but sure won't get it on DVD. Good review.