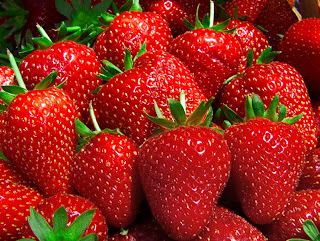 I love my local farmers’ market. It’s such a delightfully different experience from buying a vacuum pack of veggies, or an egg carton with a “Use By” date stamped on the end. I can look the merchant in the eye and ask, “What’s your most flavorful apple today?” or “Which of these lettuces will keep the longest?” and expect an honest answer, not a supermarket shrug. I can ask for a cooking or storage tip, and share feedback from our table the next week. To me, the big benefit of buying at a farmer’s market is the seller’s and the buyer’s mutual satisfaction.

You might say the farmers and I have a relationship. We connect on a level unavailable when there’s a middleman. Unlike my supermarket experience, I don’t have to wait for service until chatter ceases about which clerk is going to take the next break, nor are employees making snide comments to each other about their mutual enemy, the store manager. I like talking to the people who have gathered, picked, caught, or created their offerings—vegetables, fruits, eggs, honeys, fish, cheeses—the people who have arrived two hours early to set up an appetizing display of their wares. They are interested in me as their customer, rather than viewing me as an annoyance with a telephone number to be keyed into the computer or a credit card to scan. I am choosing to buy their products, which means they have a significant stake in my satisfaction.

Browsing through recently harvested produce, I find myself grateful to have such bountiful choices. I love seeing the dirt on the spinach and the little holes in the beet greens. I enjoy knowing the man selling the Yukon Golds actually planted the seed potatoes. The teenager, eagerly packing up three boxes of strawberries for me today, was yesterday helping to pick them; the woman selling honey-based soap owns her own beehives. Every jar of jam from the “Jam Lady” is made from fruit purchased from sellers in nearby stalls, meaning she shops where I do! And every jam jar has a handwritten date on its label—just like my mom’s.

Yes, local food products are often more expensive than the mass-market deals available at big-box grocers. But as the saying goes, “You get what you pay for.” Not only is fresher food more nutritious, but it tastes better, too. In my experience, produce from the supermarket is often compromised in taste and texture: apples can be bitter or soft, potatoes may have a sour aftertaste, and blueberries can be flavorless. My expectations have been lowered by the produce coming in from the southern hemisphere or across the country; I have taken for granted how fruits and vegetables trucked from far away places frequently don’t ripen properly. What a lot of “bad” produce over the years I’ve thrown away because it was inedible!

When I buy lettuce at the farmers’ market, it lasts me one full week and is as fresh and tender on the last day as the first. No waste. None of that brown crusty-edged cut greenery in a bag. No mealy tomatoes, either, or bitter carrots and wilted broccoli. The real satisfaction for me—the real value—is the quality of food. I can cook up, say, beets for company and someone will inevitably ask, “Where did you get these delicious beets?” And the pleasure of biting into a plum and having the juice dribble down my chin (because it was tree-ripened and picked the day before) is palpable. Having every single berry in the box be flavorful and fragrant–not crunchy and white inside—is something I used to think was impossible.

My local market isn’t going to sell avocados, bananas, oranges, or coconuts (unless I were to live in Hawaii). When I stick with my Seattle-area farmers’ market, I won’t be buying peaches in May or asparagus in September. But the corn in late August and the peas in early June will be sweeter than anything I can buy elsewhere. Why would I buy Brussels sprouts grown somewhere else, even if they are 3 lbs/$1? I will buy them from my farmer friend at $1.50 a pound, and find them so delicious, I’ll wonder how anyone could dislike them.

Some big supermarkets are starting to pay attention to the trend of “buying local” and some offer local products when available. But some apparently have bought into the trend as a marketing gimmick only. In late October, I reached for pears at my supermarket under a sign that proclaiming LOCALLY GROWN, only to see “Product of California” printed on their scan stickers. When I approached the produce manager of the supermarket to ask why he considered California a local source, he was probably being truthful when he said, “Oh, we just now changed them [the pears] out,” and he removed the sign while I watched. But the next week, the same sign appeared over a bin of apples from New Zealand! And speaking of stickers, one minor delight at the market is the absence of those little peel-able stickers on individual fruits! In fact, many of the stands at my farmers’ market let their customers mix-and-match fruits for one price, or, at least, mix types of apples or peaches—weighing everything without help of scanners and barcodes. And what fun to bring home a huge bouquet of flowers for less than a bundle of three blooming stalks—products of Colombia—carried at chain food stores.

Every dollar we spend at the market stays here in our local economy. Every one of our expenditures contributes directly to the livelihood of someone who is practically a neighbor—farmers from Redmond or Mt. Vernon, Anacortes or Wenatchee. We live in the same state, pay taxes for the same services, and eat from the same Washington State table. We are community.

I wish everyone could shop from local merchants. I know that isn’t practical, and sometimes not affordable. But the more we patronize farmers’ markets, the more local food we’ll have to choose from. By purchasing from our neighbors, we are helping them stay in business. We strengthen our community and get to know our food providers. And that’s good for everyone.
© 2010 by Sara J. Glerum
All rights reserved. Electronic version published 2010
at 9:07 PM

Great essay on why we shop at the local farmers' market. Worth publishing in any number of magazines!!
Lucy

Thanks for sharing your love affair with the local market. Makes me salivate for those strawberries. Ginny