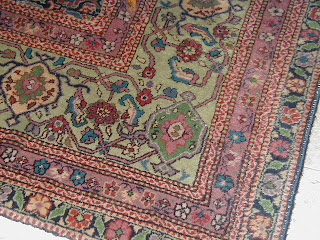 I’ve been doing my routine housework today with a tremendous sense of delight and relief. I can’t stop thinking about this wonderful man, Harry Myers, a rug merchant in the University District who specializes in antique oriental rugs. In one short phone conversation with him, four decades of burdensome worry—guilt, even—has melted away like ice in a hot drink.

It all started back in 1972, three years after I inherited a large (9’4” x 13’3”) oriental rug from my mother, who—in turn—had inherited it decades earlier from her mother-in-law. Our family was getting ready to relocate 2,000 miles away, so I called a company that specialized in oriental carpets to clean and wrap it for the move. The man on the telephone agreed to send one of his experts to our home to pick up the rug.

Surrounded by four children who had all appeared at my side when they heard the doorbell ringing, I greeted the carpet company’s driver. He stepped into the family room and onto the rug in all its plum, green, navy-blue beauty. “Oh, lady, this is some rug,” he said. “This is a beaut. Don’t ever let anyone try to buy it from you for cheap—it’s worth a lotta dough!”

He was earnest; he was a professional. My heart beat a little faster as I wondered how much I could get for it. Money was tight in those days, and the move was costing us a fortune. For just a moment I thought about asking, “What will you give me for it?” but nipped the impulse. Instead, I remember looking at the children and thinking (and maybe I even said it aloud), Did you hear that, children? We have to be more careful with our rug. “Thanks,” I responded to the driver. “I’ll remember that.” And I did I ever.

For the forty-two intervening years his words haunted me. The rug had been fairly new when my mother inherited it in 1947. My grandmother, who was known for quality purchases, bought it to use in the living room of the apartment where she moved as a widow. My mother had always used it in the dining room of my several childhood homes. But in 1969 when it came to live in my house, the rug was just the “family-room rug.” We used it. Children jumped on it, pushed Tonka trucks on it, rolled on it, spilled milk on it, and even—occasionally—threw up on it. I worried about the rug every time I knelt down to clean up something else imbedded in its nap—dog manure even got walked across it once. I thought about this valuable rug and how we were undoubtedly wrecking it. But it was the perfect size, the perfect color for the room.

When we moved across the country, the children were ages four through nine. The rug fit the family room there, too. We played cards and games on it, spilled Coke on it, stamped melting snow on it, and flopped on it to watch TV. Teenagers learned to jitterbug on it and practiced karate kicks on it. I cleaned crumbs from it, wiped spots from it (including chewing gum), and once found—to my horror—some carpet beetle larvae burrowing in it. I continued to worry about the it. I could see its nap getting thinner.

By the time we moved again, the children had grown up and dispersed. Once more, the rug was in the family room, the pathway to every other room in the house from our garage. We tracked mud over it, stepped out of our wet or muddy shoes on it, spilled popcorn and an assortment of juicy snacks on it for more than two decades. I did daily aerobic exercises on it, and recently we’ve jumped around in stockinged feet on it, as we’ve emulated bowling, tennis, golf, skiing, and jogging on an electronic Wii game.

At first, the small threadbare patches looked like spilled crumbs. Eventually the bare patches looked as if the rug belonged to a neglectful homemaker. Close inspection revealed threads of the backing, which was white, showing through to the top. The rug was balding! It was still a beautiful color and pattern, but it was no longer luxurious. It looked tired and old. The rug was wearing out. I beat myself up over it. Rugs that had been in sultans’ palaces for hundreds of years, even a thousand, were in better condition than mine. Why couldn’t we have treated it better, tiptoed on it, allowed only socks on it? I felt a complete flop as a keeper of heirlooms.

A few months ago my husband and I bought a condominium townhome with no space large enough to accommodate the rug. We would have to dispose of it. I checked with the grownup children, all living far away, to confirm my hunch. Yup, none of them wanted the rug. I would have to sell it. I started with the yellow pages and did research on the Internet. I located Harry Myers who bought and sold handmade antique oriental rugs. He came with exactly the right references and lavish praise. Honest. Knowledgeable. Fair deals.

When I phoned him to ask if he could help me, we had a great conversation. Yes, it was quite possible he could be interested in my grandmother’s rug—it sounded rare in those colors, maybe a possible gem of a handmade rug. He explained that it could probably be restored and told me many collectors happily paid thousands to restore the old rugs they purchased. Even in degraded condition (his phrase, one that greatly understated the problem, in my opinion), the rug could be collectable. I was beginning to feel better—maybe the rug wasn’t hopeless. He explained the first thing I should do was to photograph the rug, both front and back. From the backside he could tell the country of origin, even the exact village where the rug had been made! I got off the phone, took photos, and transmitted them electronically.

I heard from him a week later—during which time I imagined him doing research on my rug. He apologized for taking so long to get back to me—a holiday had intervened and he’d gotten behind on his administrative work. “Well, I have some surprising news for you,” he started. “Your rug is, uh, actually machine-made—and, of course, I only deal in handmade rugs. On a good day, at auction and if it were in mint condition, it would bring . . .,” he paused and took a breath, “uh, on a really good day, it would bring between one- and three-hundred dollars . . . actually, probably closer to one hundred.”

I couldn’t suppress my reaction. The corners of my mouth were beginning to turn up. I felt the guilt melting away. “What? It’s machine made? That’s great!” I don’t think Harry Myers was used to hearing such elation on the other end of the line when he delivered this kind of news. But I was utterly overjoyed. “It’s probably lasted way beyond its ‘lifespan,” I continued. “It lasted seventy years! I’m amazed!”

I was not the “bad” rug-keeper; my family had not destroyed a priceless treasure. We had just used an ordinary—albeit pretty—rug and worn it out. Harry Myers went on to say, “You might be able to sell it in a garage sale for maybe fifty dollars, or give it to one of your neighbors who’s admired it. Of course, you can always donate it to one of the places that accepts household furnishings.” I thanked him profusely for his call, got off the phone and went into the family room where I mindfully stepped onto the rug.

“What a great rug,” I said aloud, “and we don’t owe each other a thing.” My big fat sigh of relief carried me over to my desk where I checked off “rug” on my list of things to deal with before moving into the condo. I dragged out the vacuum and—for the first time in many years—didn’t feel bad vacuuming its bald spots.

It WAS a great rug -- I always loved it. Kudos to you for getting so much life out of it! And what a relief to know that it wasn't missing out on its potential, as it were...